Go direct to the Toys&Learning/Schleich website where you can see all Schleich products. 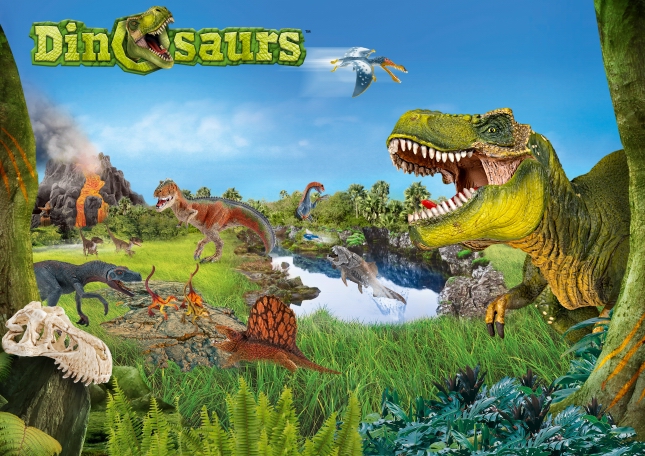 Here is a selection of new products released in 2021 from Schleich’s ‘Dinosaurs’ range.

The Schleich DINOSAURS Jetpack is popular with the Colby Brothers, especially because it’s so fast and maneuverable. Maxx Colby uses it a lot because he wants to find out how fast a flying dinosaur is. That’s why he races with the Tupuxuara. He always has his staff weapon with him just in case!

The helicopter from Schleich DINOSAURS Attack from the Air is perfect for following and catching dinosaurs from the air. Dino researcher Luis specially developed a tranquilizer cannon to be attached to the helicopter. Luis takes to the air to take a round flight in his helicopter. But be careful! A large Tapejara isn’t at all pleased to find the helicopter has entered its territory, and immediately takes chase. Luis skillfully uses the control stick to make a fast 180 degree turn. The Tapejara tries to swerve but Luis activates the tranquilizer dart and net perfectly. The dinosaur is caught and can be easily carried with the winch on the helicopter.

The Brontosaurus from Schleich DINOSAURS has a long tail, an enormous body and a narrow neck. The dinosaur grew to around 15 tons and 22 m. While skeletons of the Brontosaurus have been found, scientists have never found a skull. It probably had a small head similar to the Apatosaurus. The name Brontosaurus means “thunder lizard.” Scientists used to believe that the dinosaur snapped its tail like a whip

The Ceratosaurus from Schleich DINOSAURS was a carnivorous dinosaur that lived around 150 million years ago in the Late Jurassic period. Two bumps at the eyes and a large horn on the nose were made of bone. They were used either in combat or to deter rivals. On its back were also numerous spike-like bones. The many bumps and plates gave it its name: Ceratosaurus means “horned lizard.”

The Pachycephalosaurus from Schleich DINOSAURS is the largest beaked, herbivorous dinosaur ever discovered. It grew to around 4-5 m in length, 450 kg, moved on two legs and lived in the Late Cretaceous period in North America. Its strong domed skull was 20-25 cm thick. Scientists believe that it used the skull to ram or impress rivals. Pachycephalosaurus means “thick-headed lizard.”

Can Flynn protect Steggy the little stegosaurus from the dangerous T-Rex? Wild dinos are quickly subdued with the pole-arm. Discover all of the Schleich DINOSAURS world and the exciting adventures of the Colby brothers at www.toysandlearning.co.uk.

Schleich have been around quite a while now – with their origins in the 1930’s – switching across to toy making in the late 1940’s. The principles of quality throughout every aspect of the thinking designing manufacturing and supplying have been apparent since their very early days.

Today Schleich are world wide market leaders in making value for money top quality models. All their models, toys, figures are brilliantly moulded and then finished with hand painting. You just can’t find a better range or better quality.

We found across the years that if a toy had been designed first as an enjoyable product it was always better received than if it started out as as educational product designed as a toy. Hence our change around – we now specialise in the best models available in the UK from Schleich, Papo and Breyer – because of our background we also sell our own selection – The Best Selection Range – of enjoyable toys that widen children’s horizons.

Models themselves are a wonderful way of enabling children to use their imagination whilst engaging with the wider world. Schleich, Papo and Breyer between them cover a huge range from designer quality horse models from Breyer through brilliant French design of Papo to the fantastic quality of Schleich products covering horses and accessories, farm animals, wild animals, pets, dinosaurs, dragons, fairies and elves, along with a whole host of gift sets.

A sister website to Toys & Learning. We have put together a separate site for a few of our key suppliers – with links into Toys & Learning – to help customers have an overview of that brand and see what it is that sets them aside from others, and to help gain easy access to the products they want.